Today is a red letter day. For the Tyrian Director Arketer.

A very small red letter day, that might yet turn out to be a capital A despite that context not working in the slightest.

For today, Arketer Labs of Tyria holds an exhibition deathmatch between two relatively well-known players. Specifically one Caelite and one Ajax.

It should be quite novel, if misleading, as there will be no actual death even though one or both of the combatants will be destroyed utterly.

But all is not well, for in the Role-Playing World of Guild Wars 2 there has been something of a full and total schism in a guild dedicated to represent the U.S. Congress of Tyria, the human Krytan Ministry.

This war between the factions has spilled over into many places, but most notably the Guild Wars 2 Secrets Tumblr. 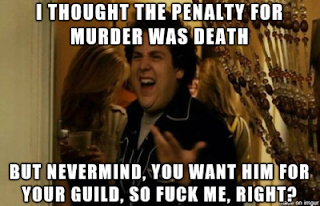 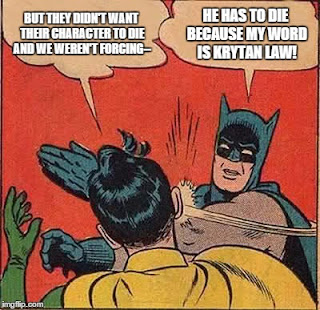 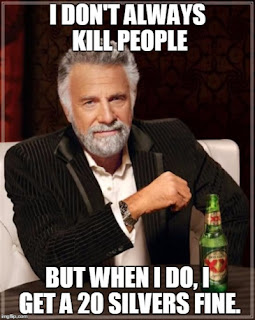 On one side of the conflict you have The Krytan Ministry, [TKM] for short, who has existed the longest. One Michael Benedict is a proponent of the Service-to-Immersion school of thought, and stands out as one of the very few Ministers who upon meeting Director Arketer of Tyria HASN'T immediately begun insinuating that what they are doing is unacceptably illegal and that they need to share their every secret with them and/or turn over all of their work.

On the other side, you have Her Majesty's Ministry, [HMM] for short. As of this writing they were led by one Alexander Salian, who is under the curious impression that they can force cooperation with what they deem acceptable demands.

In my experience, their demands are not especially reasonable. From their first interaction with the Tyrian Director they have been demanding, borderline discourteous and profoundly paranoid with absolutely no effort made to discuss OOC what I care to accomplish.

Even when I resolved to yield that Arketer Labs was subject to a moratorium on creating Watchknights (Clockwork soldiers of a sort, crafted by humanity through rather cheaty ways and utterly hijacked by the Writer's Favorite villain, Scarlet Briar- the Mad Plant Person who attended ALL THE UNIVERSITIES and studied under ALL THE RACES- despite being at or under 25 years old) Salian immediately moved on to demanding to know where all of Arketer Labs' facilities on Tyria are for... reasons.

Presently, they are ignoring the Tyrian Director- which I can only hope continues. Should they feel inclined to acknowledge his efforts however, I can rest fairly certain that they will be firmly in opposition.

Which, as it happens, is precisely what I hope. After all, it would be simply rude to assume Arketer Labs of Tyria has the full support of the Ministry- and it makes perfect sense if like the U.S. Senate they can hardly decide on how to put on their pants.

It's been said quite aptly that if you want to ensure as little as possible gets done- put a committee in charge of it.

Really, about the only way this event of mine can go spectacularly wrong is if Salian spontaneously decides to stop ignoring it again and get himself somehow injured at the showing.

Either way, he would be much better off if he stopped grasping at imaginary power and recognized that in-game reality is a product of consensus at best. No one gets to dictate anything. 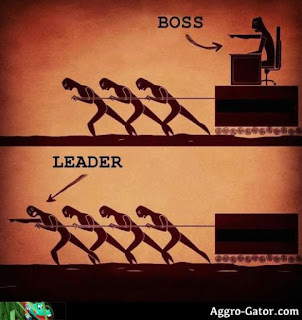 Meanwhile if this does go well, I intend to effectively re-launch the guild Arketer Labs of Tyria.

Watchknight Proxies for everyone! (Who applies and meets certain criteria.)

There are a number of things that many Role-Playing guilds don't do, presumably for immersion reasons. For instance there are dragon enounters rarely done In-Character because it is presumed that in most cases anyone living would find themselves not-living in short order.

That won't be a sufficient deterrent when the characters are driving Proxy Watchknights remotely.

I have excellent ideas for Proxy Field Tests that will take members all across Tyria, and perhaps even handling definitively Suicide missions for the Orders. In particular I hope to form a friendly relationship with The Ashen Chapter (edited update- I have been given the very clear impression elements of The Ashen Chapter would prefer to neuter/spay themselves with a hammer than consider this. Alas.) who play as Vigil members- The Vigil being an order within Tyria that prefers purely military solutions to the Draconic Threats the world faces.

Why should it be any different for their characters?

Progress Continues!
Posted by Arketer at 6:21 AM