In utterly trivial safe-for-discussion Guild Wars 2, I am pleased to report the Watchknight Proxy exhibition went quite well!

The Tyrian Director- at the demand of the Ministry Guard who could not be bothered to attend- oversaw the event personally- in person- no doubt much to the dismay of their fictional #0. The worst thing to happen to them however was that they were punched on the nose.

A brief summary is that at the appointed time two combatants turned up just in time to, fictionally, take control of their respective clockwork simulacrums- proceed to the designated area...

And brutally destroy eachother in clockwork carnage- which as planned looked very real up until the very end.

Which, as it happens is precisely why the Tyrian Director was punched.

You see I, had failed to brief the Medics who had been recruited to oversee the combat properly. I, for a given value, HAD informed them there would be no actual death at the Deathmatch- but with the impending deaths of two well-known faces they disregard the Director's advice to attempt an emergency intervention.

Fortunately they were not hit by any flying parts.

One of the Medics who witnessed this felt their offense over the scare did not outweigh their relief at there having been no harm actually done, and thus punched the Tyrian Director at the conclusion.

By all accounts save one, it was a novel and unprecedented display.

As for that one account- that was predictably Lord Alexander Salian, as mentioned in the last update, who after mumbling about fetching the Shining Blades in-character at the conclusion of the event rushed off to make yet another GW2Secrets image macro out-of-character.

There are a few things wrong with this assertion, one detail of which Calliopelapis there addresses and will be gone into detail shortly- FIRST however is that the Tyrian Director cleared his plans for this event not only with the Ministry but the Player-Run Shining Blade guild. (The Shining Blades being the magical Queendom of Kryta's answer to the Secret Service of the U.S., by way of belated explanation)

The next detail is that Watchknights are machines. Machines can be improved- in this case by removing their autonomy in favor of direct human control. There is no rational reason to insist they are certain to be hijacked again.

I also continue to protest that abandoning a technology because it was stolen once makes about as much sense as discontinuing air travel because of 9/11. IT COULD BE USED FOR EVIL AGAIN!

Fortunately for me on this point, ArenaNet would seem to agree- bringing us to Calliopelapis' point. 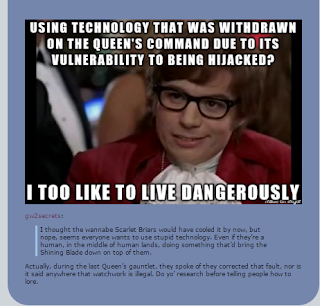 Unfortunately since the event I have not seen a notable interest from people in hiring on to Arketer Labs of Tyria to field-test these remote-control war-machines.

It really has proven surprisingly difficult to interest people in this game in playing with robots with the exception of the Asura and their golems.

Still, I shall keep the effort going- but I must note being turned down by a Baker's Apprentice was something of a wicked burn even by two separations.

Meanwhile Donald Trump continues to be not laughed out of the running- which I appreciate that Jon Stewart can find hilarious.