But I'm not getting into that.

Instead this is a Let's Read of The Lady of the Fountain from The Mabinogion, as translated by Lady Charlotte Guest. I call it a Let's Read because I will be doing the reading, you will be reading my summary. It's almost like reading it yourself! Which you probably don't want to do. If you DO want to however, you can read the original at :

Our story begins in Caerllon upon Usk, a favorite haunt of King Arthur. Yes, this is indeed a bit of Arthurian myth, but I will be sparing the ye old english in favor of paraphrasing.

In Caerllon we begin with an exciting evening of King Arther taking a nap, foreshadowing how much of a part he'll have to play in this tale (none). While he takes his nap some of his knights get it in their head to tell stories. At this point one Kynon, who we will be calling Krillin, avows he has the finest story to tell.

While wandering about looking for trouble he was given good food at a castle populated by people who really like the color yellow in utter silence because they feared offending him. You see it was very important to be a good host to wandering armed men in Arthur's time, as most of them were primarily just looking for a reason to stab someone- but could be bought off with food.

After Sir Krillin makes it clear that they may speak with him without him murdering them all, they ask- carefully- for his purpose. To which he replies 'adventure', which does translate cleanly into 'looking for someone to stab' again in most cases. His host, however, had seen tougher and did not think Sir Krillin was up for what lied ahead. Sir Krillin takes offense and, being fond of not being murdered- his host obliges with a lead on 'adventure'.

Dutiful hosts, they send Sir Krillin off to speak with a large Black Man with one eye and one foot wielding an iron club- and ask him where 'adventure' may be found.

Sir Krillin does this thing and speaks with the giant Black Man, who's club is indeed long and massive.

The black man's grove is filled with animals so Sir Krillin asks what power the black man has over them. In demonstration, the black man hits a stag with his club and causes it to bray at which point the animals gather around them both- then bow to the Black Man before leaving at his bidding.

So, basically, that the cyclopean Black Man ruled the animals with his massive club.

Perhaps further rendered insecure by this, Sir Krillin gets on with asking where he should go, which annoyed the Black Man because Sir Krillin had yet to mention what his destination was. Sir Krillin makes it clear he's after 'adventure' and so the Black Man directs him to, in a valley and under a tree, a fountain that causes hailstorms by virtue of splashing water from it onto a marble slab.

There is no guard on this fountain, of course, but the silver bowl by which one splashes the water is chained to it to prevent theft. It would be a shame if someone stole the silver bowl used to create dangerous hailstorms from the hailstorm fountain, but even more of a shame apparently not to so much as build a damn fence around the thing.

So, Krillin finds the fountain and causes a hailstorm with it, followed by a lovely bit of birdsong and- likewise promised by the Black Man, summons forth a Black Knight who calls out,

‘Why are you here, Knight?  What did I ever do to you that warranted you coming here and fucking things up?  Did you know that lethal hailstorm you summoned killed every man and beast caught in it? Dick.’ 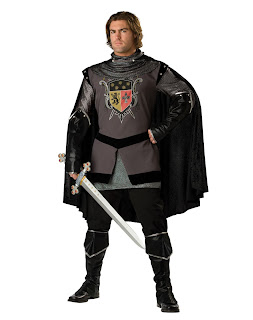 Which, it would seem to me, would be a pretty good reason to be pissed. Sir Krillin however, is a Knight, and being a Knight means never saying you're sorry so he instead fights the Black Knight, and is rewarded justly for once by getting his tin-plated ass BEAT.

The Black Knight then took Sir Krillin's horse as compensation, leaving Krillin a long walk home under the weight of their armor and a savage mocking from the Black Man.

The people of Castle Yellow were very kind to him however, tactfully avoiding any inquiry as to how his adventure went and even gifting him a horse.

Thus concluded, Sir Krillin's peers note that while the tale was fantastic perhaps most fantastic of all was that Sir Krillin basically led them along on a journey of his own ridiculous failure. Sir Owain, meanwhile, noted that he'd like to take a shot at this 'adventure' himself before Sir Kai suggested Owain was full of hot air.

And then King Arthur woke up from his nap, to undertake the noble quest to eat dinner.

Progress continues.
Posted by Arketer at 6:59 AM