I've been very distracted as of late. We're making some progress with our latest troubles, but I really hoped to have everything fixed by now. It's all painfully frustrating.

I've hardly been able to get into playing Guild Wars 2 accordingly, which has explicably hamstrung my efforts to make anything of the guild I started within it.

I really should try though. The employee who's account I've been using recently gave it to me outright, apparently they have burnt out on playing it. This is fortunate as it was always a bit awkward when someone they knew wanted to speak with them while I was playing my characters.

This also means I have more or less inherited their characters as well, which consist of a human guardian that appears to be the love child of Darth Vader and a Furnace, a Sylvari Engineer/Medic with an eldritch horror of some sort on their back, a big green-armored Norn and an Asura Mesmer that is trying very hard to look like an alcholic hobo warrior. I'll... do something with them.

I've been sure to thank #82 for their generosity and recompensed them somewhat.

Meanwhile, here is the third parody installment. Even greatly abbreviated for the sake of parody this is a tedious film... If anyone out there is enjoying this, I'll continue- but even I'm having second thoughts in the meanwhile.

In the deepest recesses of the forbidden sector, on the Planet Taboo, situated within the Verboten Peninsula, inside the Alcatraz Palace, Lord Reticulatus Saxabras sits on the Throne of No-Nos and turns his attention to an approaching minion.


Mr. Night: "There was a... mistake, my Lord. Ms. Duvalier had a different genetic makeup, their name was used by someone else. N-now we have determined the reincarnation is there, they turned up for the donation procedure- but we did not get there in time before they were taken-"


Meanwhile, back on earth...

It was hard to accept what Channing Tatum was saying. If I hadn't seen little grey men probe the hell out of my employer just so many hours ago now- there was no way I could.

Uranus : "You're telling me that Humanity didn't evolve on earth, but is in fact the dominant species in the galaxy- which it rules in a pseudo-corporate fuedalist manner- with all of the power in the hands of millenias-old genocidal maniac nobility called 'Entitled' who liquefy planetary populations of less-developed humans in order to create an... elixir of eternal youth for personal use and profit."

Channing squirmed at some of my terminology for some reason.

Channing: "Well, that sounds a bit harsh... I mean, they do seed human life on the planets first. They own the planets and the people on it."

Channing: "No. Well, I mean, one of them hired me to find you- but I'm just hired, not owned."

Uranus : "Because I'm Entitled then."

Uranus : "Self defense." I lied. "I don't think these other Entitled will want me joining their ranks."
Not when they learned what I had in mind anyway.

Channing : "But you're the reincarnation of the most powerful House's matriarch! The children from your past life are just thrilled to have you back! Once we get you to my employer, their MechaLuchadores won't let anyone hurt you."

He stared at me a moment, then sighed and handed over an alien pistol of some sort.

Channing : "If it makes you feel better."

He then gave me a brief tutorial in it's use, after which I tucked it away.

Uranus : "Allright then, what is the next step?"

Channing : "We're off to see my mentor, who can arrange for us to get a ride to my employer's place. From there, we go to the Hall of Records and get you Entitled. I get paid, you start a new life- everyone is happy." 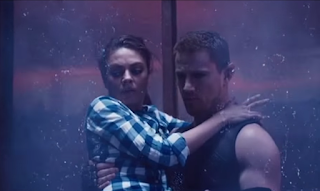 Channing : "Off of the top of Sears Tower in Chicago in plain view of everyone?! We'd be blown up by planetary guards in no time! No, no. We drive."

Uranus: "Oh. Well. So long as the windows are rolled down..."

Uranus : "No. Look, I'm going to be Entitled- do you really want to cross me?"

Channing whined in a manner very much more dog than wolf-like, but grudgingly set about getting ready.

In short order we were on the road- in an awkward silence. I recognized the silent treatment.

After an hour, I finally cracked.

Uranus : "Look, I'm sorry- but you really needed to wash that thing."

Uranus : "Who is this mentor of yours anyhow?"

He grumbled a moment more before answering, apparently deciding to give it up.

I rolled my eyes and lied back in the carseat. Galactic citizens approached my Father's poor taste in names, clearly.