In the ongoing moral panic over bad flags, professional golfer Bubba Watson is going to repaint his car.

Yes, Bubba Watson is the owner of the General Lee, celebrated vehicle of- at the time- beloved television series The Dukes of Hazzard.

Yep, times're lookin' mighty grim for them Duke Boys, what with even them fellers down at TV Land refusin' to even put the show on the air nowadays.

Getting back to back to the General Lee. Apparently prefacing his announcement that he intends to utterly destroy a piece of american pop culture thusly. 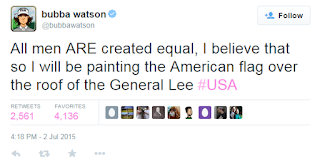 As this original General Lee is now nothing more than a memory with the repainting ruining what authenticity it might have had, let us go in a new direction shall we? Repainting the top with an American flag is a good start, but it needs a new name and a new theme. Something that really drives home the just and total victory of the North.

No, no reason to make it into a General Grant.

There is a Union General that is under-appreciated. An unsung hero if you will and now is the time to give him the credit he is due.

Yes, it's time for the General Lee to become the General Sherman! Let us commemorate the architect of the March to the Sea. I am not being facetious, I would note. This is the single best thing they could do to make repainting a car have any worthwhile meaning whatsoever.

When the Confederacy rebelled it was funded primarily by wealthy plantation owners and the like who had the idiotic notion that they would just have the ignorant lower-class folk do all of the fighting and dying for them. Mr. Sherman recognized that fact, recognized that they wished to reap all the glory of war while paying a minimum for it personally- and he would have nothing of it.

As such he began the March to the Sea, capturing Savannah and more or less razing everything to the ground along the way, he waged hard or total war and bitterly did his utmost to make it clear to the South that war is indeed hell.

Gone with the Wind was partially set during the burning of Atlanta, and the characters then and now suggest the greatest shame was that Mr. Sherman left anything of the city standing at all.

So paint that car a dark blue with flames going up the side, maybe slap some georgia plates on there and let General Sherman ride again.

Progress, rather than the superficial veneer of it, continues.
Posted by Arketer at 9:31 AM