The coffee crisis, such as it was, is resolved. I have to say I appreciate the enthusiasm demonstrated for solving the caffeine conundrum. The budget is being reworked as I type this.

Developments, meanwhile, continue in the great internet slapfight that is Gamergate.

Most heartening, a member Society of Professional Journalists has taken up an interest in Gamergate. Specifically, it would seem, the way it makes the other supposed guardians of ethical standards hyperventilate and go into hiding when the topic is brought up.

It's almost as if there is something that scares them far more than a 13-year old on twitter calling them bad names. I wonder what it could be. Perhaps it's coming to realize they are for the most part an irrelevant bubble paying lip service to ethics while in practice the only thing they care to protect is themselves.

One Mr. Koretzky is making the effort to improve the image of the SPJ by demonstrating possession of a spine. I wish them well.

Meanwhile Joss Whedon, Director of The Avengers : Age of Ultron, after the school of Piranhas he normally swam with on Twitter turned on him over perceived misogyny in his depiction of the Black Widow, coincidentally deactivated his Twitter account. Pure coincidence. So bothered was he with the implication that this hateful swarm of people who he had presumed allies was the reason for his departure, he gave Buzzfeed- truly the most deserving of 'news' outlets an interview over the phone. 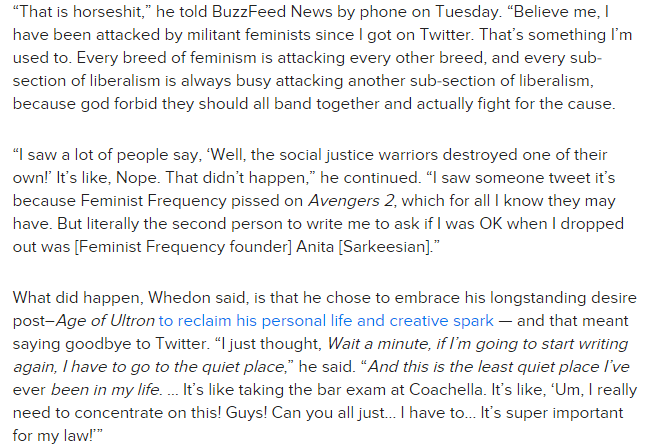 He twitted his way through two Avengers movies but NOW it's too noisy. It has absolutely nothing to do with this, though.

Well, whatever Mr. Whedon tells himself, I am glad he has seen fit to retire from Twitter. Which, as has been suggest by better writers than I, is only good for making short jokes and tends to make people who use it for anything else into objectively worse people.

Rather listen than read? TotalBiscuit has you covered.

But enough about this!

I'm hearing curious rumors of a new faith among certain members of the staff within Arketer Labs, a cult even, and quite frankly I don't know what to think about it. As it could be a dire development indeed I believe I will take Mr. Whedon's cue and try once again to stop paying attention to all this in favor of something more productive.

Progress continues!
Posted by Arketer at 11:34 AM