Rancid Romance and the Flawed Concept of Seekers.

Much is going on right now, but for tactical reasons it would be unwise to go into details.

So instead, more about Dragon Age : Inquisition. With minor spoilers.

The last time I mentioned this game you may or may not recall I elected to romance 'Cassandra Pentagast'.

This, in hindsight, was something of a mistake.

Now, to be fair and give credit where credit is due, this should have been predictable. Cassandra does give every indication of being a maniac (if occasionally cute as such), so it should not come as a surprise that their response to romantic gestures is to say you can't flirt with them because they want an ideal and you're the Inquisitor. While at the same time demanding poetry, candles and flowers.

To make any progress in the relationship, you must then fetch flowers, a book of poetry and what turns out to be "The Most Romantic Candle in Thedas".

Then, and only then, do they meet you in a secluded grove where you character will suavely speak memorized lines of poetry. To which their response is... 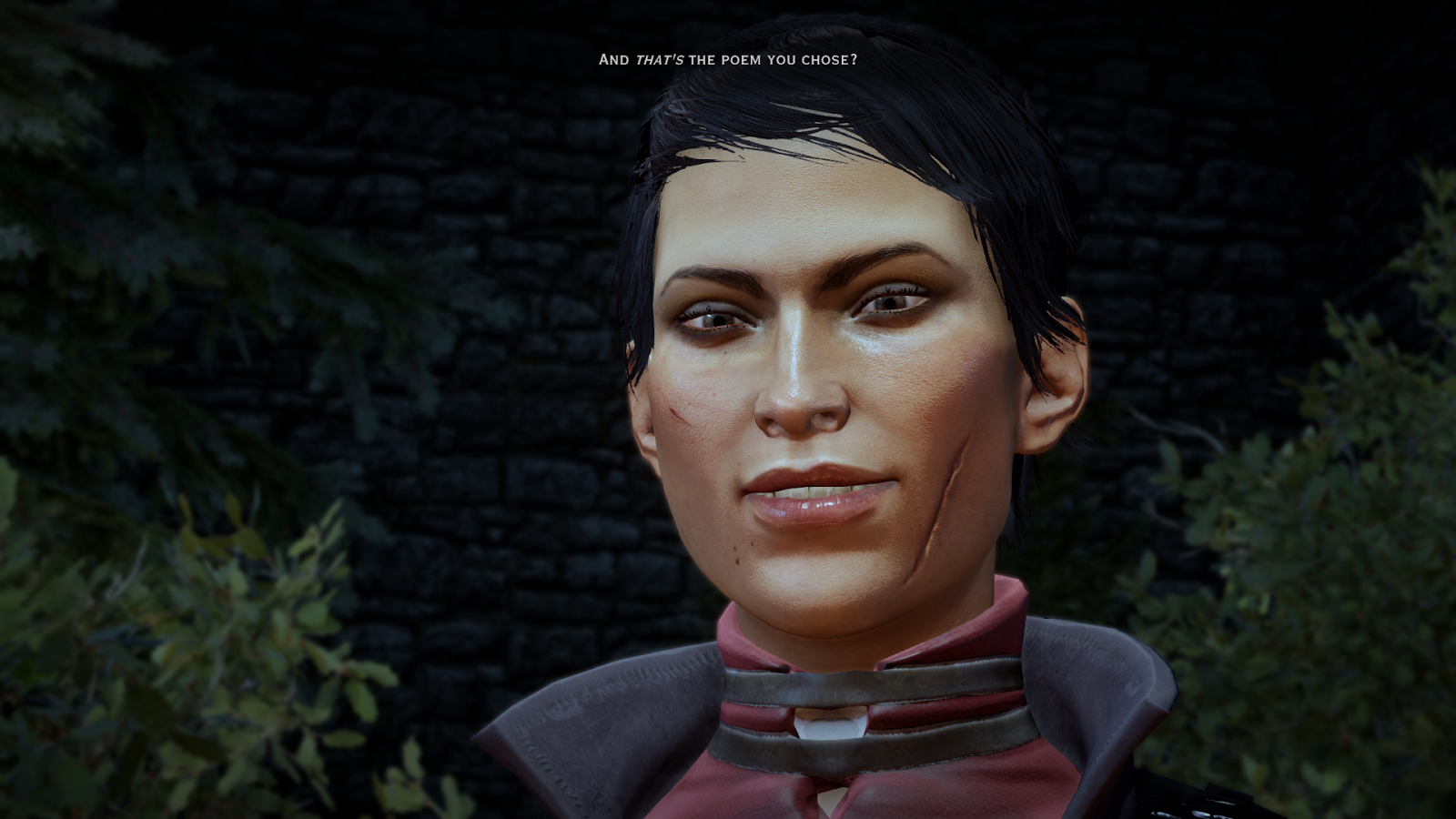 Apparently this is going well though. If it were going poorly I presume she would take out a knife. 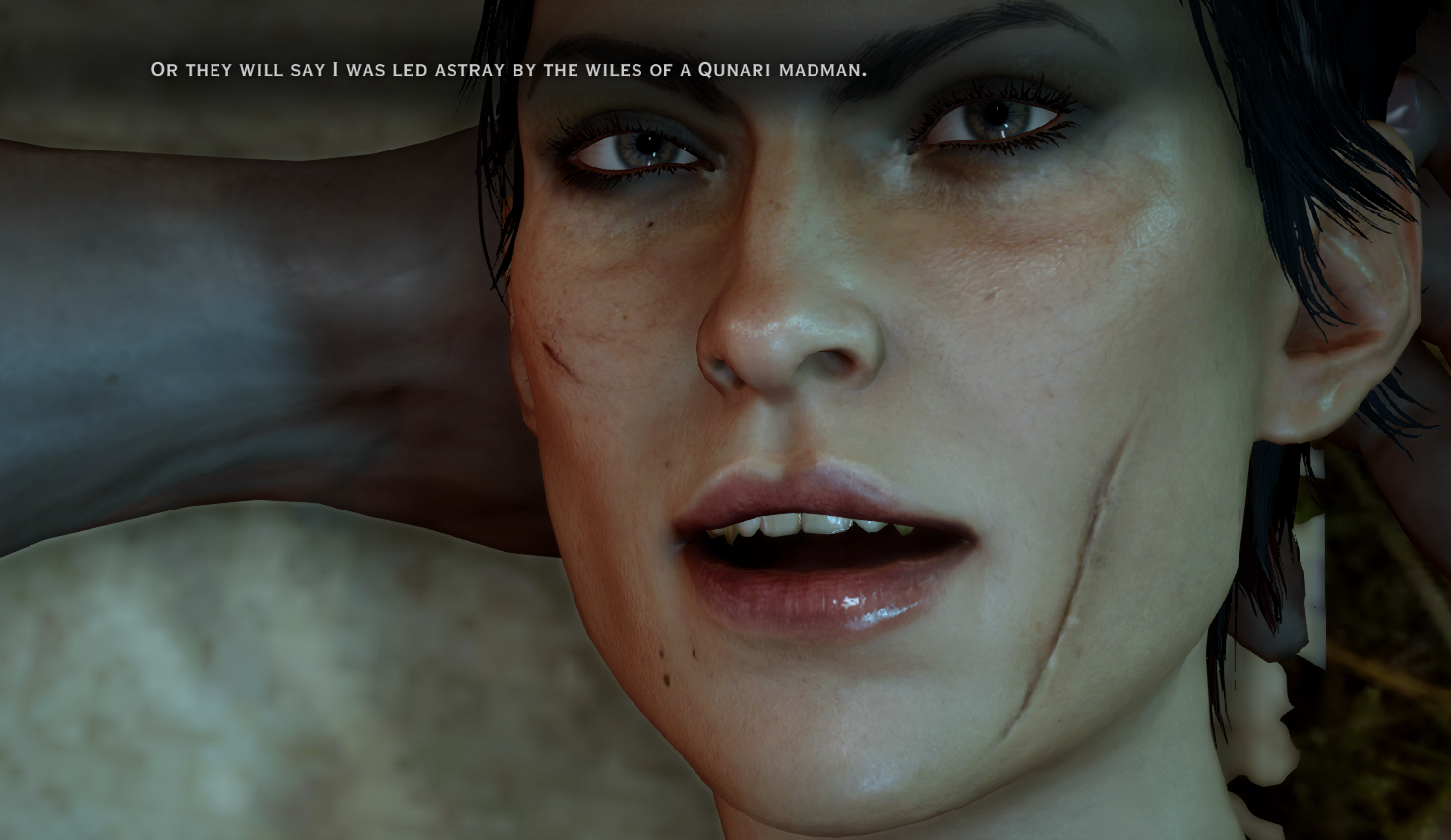 Well, who cares what they say, right?

What does SHE think?

She promptly lets you know that you scare her. Just what every man wants to hear from the person they love.

Wait, maybe the Inquisitor has still failed to make his feelings clear.

Let's have him just outright say "I love you." There is no missing text from this part. This is all she says on the matter. At the moment, she believes the Inquisitor. I am certain he is ecstatic that he isn't thought to be a liar. I mean, he has to prove himself over and over again and but she can't return those three words honestly (because, let's be fair, she IS very honest), but at least she doesn't think he's a liar. That's nice.


So in summary of things up to this point, my Inquisitor is now in a relationship with a woman who is insecure, demanding, critical and incapable of saying I Love You. I'd have him break it off but I'd say the odds of that resulting in a murder-suicide are unacceptably high. Besides, he's a Tal-Vashoth Qunari, maybe he's really into this. Not judging.

And, again with credit to the writers, from all we know about Cassandra and Seekers, this really does make perfect sense. Or maybe it's just Cassandra suffering the effects of Qunari Poison Facepaint exposure.


But no, it's probably because she's a Seeker. Or for those of you not familiar with the lore, a REAL Inquisitor.

Seekers are made by being magically severed from their emotions and then reconnected to them! This gives them pseudomagical powers. It also makes them the worst detectives in the world.

Why? Well, the process they undergo is called being made 'Tranquil'. It makes people in the game world subjected to it unable to use magic, feel emotion, dream, or care very much about anything.

It turns out that mages who have the Tranquilization process reversed however all but lose control of their emotions. They are prone to exciteability, anger, etc. etc. This is basically Cassandra in a nutshell. She may not be a mage, but she's one of the clear examples that the side effects are universal.

She's not the only one.

This makes them objectively the absolute worst possible people to have in positions of authority, much LESS tasked with determining the truth. Anger and fear make you stupid. This isn't a hollow statement, the studies have been done. It's not even news, the media has been capitalizing on it for years, savvier powers-that-be exploit this to ensure people don't think about the big problems too deeply and thus come up with solutions that might upset the profitable status quo.

And in the world of Dragon Age the Church has made their secret police, responsible for preventing corruption among the police (Templars) entirely out of magically manufactured manic depressives with anger issues.

Comically, in this context the Big Bad not only isn't threatening the World in any meaningful way- he's providing the Common Enemy to motivate the unity of otherwise impossibly corrupt and incompetent societies.

Either the writing is brilliant, or someone at EA is so bad at it they're coming around to brilliance from the other direction.

That said, what a miserable romance.

If you read this expecting something else, my apologies.

In the meantime, progress continues!
Posted by Arketer at 4:17 AM