Deep Seven : #16, a Complaint and an Under-Appreciated Board Game.

Deep Seven continues to come along nicely as a new milestone is reached. The foundations are mostly complete and a percentage of the nanite cloud has moved on to begin the frame of the basic infrastructure. It continues to be a tedious affair of watching an autonomous squid fart wafting in the abyss.

That said, moral among the oversight crew has perhaps been the best of all facilities, spared as they were any mind-altering disease outbreaks. One potential problem is that despite suggesting increased physical exercise the average weight of the deployed crews has started to rise.

I plan on recalling my chef from there soon.

Meanwhile, from the inbox I received what does strike me as a fairly solid objection to our naming conventions.

Something bugs me about the CZSS squads. The acronym CZSS is clunky and horrible. I know it stands for Containment and Zone Security Specialists and is probably technically accurate on some precise level... but it's just bad. Really really bad. Also it feels like reaching for an excuse to call them "crazies". You sure we can't do better than that?

This is a fair observation. In all honesty I wanted to call them Mobile Task Forces, but it was believed the SCP Foundation would object. Dramatically. Additionally I felt they needed a title that better represented the greater weight on their specializations. I'm not truly defending my choice however as I can see how that is a bit 'clunky'. I will happily consider suggestions for alternatives.

Anyone else seeing this, please feel free to e-mail or post a commented alternative acronym for a squad or team of individuals specialized in paramilitary operations mostly revolving around the capture, recapture, and security of facilities, staff, and projects.

Finally, we had the first annual Arketer Labs board game contest in which henchperson #78943255 was victorious. The final game was transcribed as follows by someone with a vivid imagination.


The three investigators stood in the foyer of the abandoned mansion, two of them looking at the third with some suspicion.

"And you are quite sure this place will prove my theories as to the nature of supernatural phenomena?" the Professor asked, again.

The target of his question, Darrin, laughed and looked back at the Professor with a grin.

"Relax! This place is so supernatural the weirdest thing about it is that it hasn't been condemned by the authorities!" he replied.

"Shut up." answered the Professor and Darrin in unison.

"Well, now I think the smartest thing to do is to split up and explore the house." Darrin announced.

"I, hesitantly concur." spake the Professor.

"No." Darrin and the Professor answered in unison.

Thus they began their explorations, the Professor picked up a small mechanical monkey, it clapped small tin cymbals amiably- without any discernible means of power. Happily he pocketed it right beside a revolver found earlier.

Darrin, meanwhile, moved through the house surreptitiously, picking up a spear at one point where he otherwise left things behind.

Brandon found an old skull, some smelling salts, a medallion and tried not to cry.

As Darrin made his way to the dilapidated ballroom, the Professor made a discovery. A small book with a series of defaced images... ending in a pair he recognized as himself and that kid.

"Kid! Hey Kid!" the Professor called out, running to where he had last seen him. Brandon met him in the hallway.

"Yes, Profess-""SHREEEEEEE!!!" Brandon was interrupted as the small mechanical monkey leapt out of the Professor's pocket and latched onto Brandon's ear by it's faux teeth.

"Yeah, it would seem that maybe someone is trying to kill us, thought you should know." The Professor explained.

"Ow. OW! AAaaagh!" Brandon replied. Finally he dislodged the monkey, which hissed angrily as the Professor retrieved it calmly.

"Listen, if you're going to be like that then I must say 'Good Day'." The Professor huffed, turning away.

Brandon sobbed quietly for a few minutes as a horrible feeling began to overtake him. There was a sensation of overwhelming evil... It felt almost familiar. In fact, it felt just like the sensation he experienced exploring the chapel earlier. Intuition bid him to return. That, and he couldn't remember where the foyer was anyway.

The Professor meanwhile was struck by a feeling of being surrounded by blood and dirt... A similarly ominous feeling struck him in that he needed to find the place that matched this sensation. He thought back to a blood-soaked room and made his way there. On arrival he looked around, but found nothing.

Brandon, meanwhile, swiftly found a small doll in the Chapel that had been stitched from one of his old socks and given large glass eyes that felt like looking into a mirror somehow. Disgusted, he smashed it repeatedly into the stone floor- the eyes shattered and the stitches ruptured... and Brandon doubled over, vomiting noisily.

It had been, he considered too late, an ill-advised means of disposing of the voodoo doll. Still, he was alive. He would take advantage of it, he decided, once he could walk again.

The Professor had moved on to a room filled with jagged metal junk. A curious obsession had begun to grip him. He needed to find... something. Somewhere with blood maybe... and puncturing. The junk in this room seemed more than capable of that. He had already searched the operating room and the kitchen and despite blood, dirt and puncturing things perhaps being present, he could find nothing of importance otherwise.

His search was fruitless, he turned away and moved back into the hall- narrowly avoiding having a chunk of flesh torn out by the rubbish of the room.

"Oh, Darrin! You were quite right, this place is profoundly supernatural. I think it may be getting into my head though. Also someone is apparently trying to kill me and the kid? I think it has to do with something I need to fi-" The Professor was interrupted as the mechanical monkey slapped him across the face. He rubbed the slapped cheek and irritably tucked the monkey deeper into the pocket.

"You don't need to find anything, Professor. Not now I have found you." Darrin sneered, hefting his spear.

"What? It's you!" The Professor yelled. He ducked to the side, the spear's blade cutting across his ribcage as he fumbled for his revolver.

Brandon, in a nearby room, heard the yell- and a gunshot as the Professor missed Darrin. Brandon panicked and threw open the room to another door. A shadow within the room rose from the floor and turned to face him and was revealed by the flashlight to be a man with underwear on his head- two eye holes cut into the front. Perhaps more alarming was how filthy he was, or that he lacked pants of any sort.

"Mister, the Professor is being attacked, help me please!" Brandon pleaded. The man stared at boy a moment, then shrugged and started following.

"Fox news IS Fair and Balanced." the man muttered.

The Professor fled from Darrin, bleeding from a shallow wound. Darrin chuckled as he followed. He had the feeling the end was nigh. "SHREE!" screeched the mechanical monkey as it leapt out of the Professor's pocket at Darrin. The young voodoo priest absently swatted the monkey away and it fell to the floor with a faint rattle. 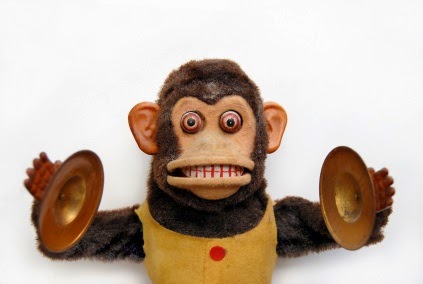 "Professo-AGH" began Brandon, who's greeting was reduced to unintelligible screaming as the mechanical monkey launched itself off of the floor and onto his face, slashing viciously with it's surprisingly sharp tin cymbals. Brandon's companion dragged them back out of the room.

"Bitcoins are untraceable, more untraceable than cash. Fithy fiat." he explained to no one in particular as he dragged the bleeding child away. Savagery complete, the mechanical monkey clapped it's bloodied cymbals merrily as it followed after the Professor, who in turn fled from Darrin.

"You should have given me an "A" on my theoretical voodoo applications paper, Professor!" taunted Darrin.

"It's not too late for me to change the grade!" The Professor answered in a panic. The mechanical monkey lazily caught up to him as as Darrin impaled the Professor against the wall with the spear.

"It's enough that you got the point." Darrin replied.

"That was... awfuu..." choked out the Professor, his revolver falling to the ground as he died, his respective voodoo doll dissolving into a pool of blood in another room. The mechanical monkey shrugged.

Bleeding from a myriad of shallow wounds, Brandon quickly darted into the room to pick up the revolver. With shaking hands he brought it to bear on Darrin as the latter pulled his spear free of the deceased Professor.

"Don't make me shoot!" Brandon sputtered. Darrin looked at him a moment, then off to the side- frowning.

"Did... Did you destroy your voodoo doll?" Darrin asked, rising alarm in his voice.

"What?" Brandon asked, blinking away blood.

"I'M A GALAXYKIN AND I DESERVE RESPECT!" screamed his companion from the other room.

"All of the voodoo dolls have been destroyed, but you're not dead! Which means I lose!" Darrin exclaimed.

"What... why- so I can go?" Brandon asked incredulously.

"Yeah. It's... the law of Voodoo or whatever, shut up and get out. The foyer is down the hall and around the corner. See yourself out." Darrin grumbled.

Brandon, age 12, carefully backed away from Darrin, who remained in the room, glaring dejectedly at the late Professor. Carefully he made his way out of the Mansion and into the still night.

"STAR CITIZEN WILL NOT DISAPPOINT ME!" screamed his pursuing companion. 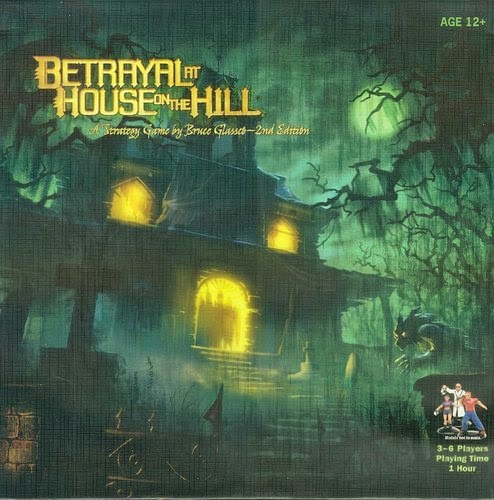 This game comes highly recommended, if only for the absurd stories it seems to inspire.