Yes, your Director has returned. Tests have all confirmed that my brain is back to a pre-infection state.

First and foremost I would like to officially apologize to everyone I may have insulted or threatened with violence and death while under the influence of the infection.

Strawman Syndrome is a nasty beast, but thanks to our most noble scientists it is a beast we have put down like a rabid dog. Only without remorse at the necessity.

I hope all of you have had an excellent holiday celebration and would like to announce that, assuming we have the last of the infected staff is cured by New Year's Eve, we will be celebrating by providing the champagne gratis at your respective parties. Thank all of you for bearing with us during this latest trial.

As I recovered I was unable to attend to my usual duties and after a regrettable incident where I apparently attempted to recruit the other infected in a second bid to escape isolation and launch what would have been a tragic and rather embarrassing assault on an Inuit community, I was rightfully severed from access to Arketer Lab's Intranet.

Once again I have a deep gratitude for all those who managed my isolation.

Onwards to the trivial things I amused myself with while in isolation.

I was graciously provided with access to a modified copy of Dragon Age ; Inquisition (My own Christmas Present if you will) that did not require an internet connection to pass the time as the cure was applied and allowed to work. I must recommend this game. It is, without a doubt, the finest single-player MMORPG I have played yet.

Yes, despite the occasionally tedious resource gathering, the combat is entertaining and all fights except for the last more or less interesting. The story is not terribly dynamic, most characters respond in precisely the same way regardless of your dialogue options, but decisions can be made that do indeed greatly effect the epilogue at the end.

And for those of you who have not played Dragon Age 2, seemingly well regarded as the lazy scat-smelling nadir of the series, you will not suffer much for having missed out on it. In fact, by all accounts you would have suffered far more if you hadn't.

You will however, meet the protagonist of that series as part of the narrative here. You will even be able to make them look identical to the protagonist you didn't play.

This game is indeed very entertaining allowing you to meet characters like... 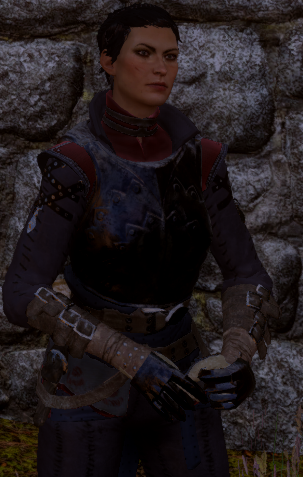 Cassandra, easily the most understanding and accepting fantasy Christian (Andrastian) interrogator ever conceived of. She's very intelligent and idealistic when not angry, though when she is angry she is as principled and intelligent as a crazed hobo with a large knife. She is usually angry. Despite this she is extremely understanding if your character happens to be a gay elf in a relationship with a fantasy muslim (Qunari) spy. As are all the companions really.

Such scenes, regardless of their feasibility within the established lore, make the game truly remarkable. Also Freddie Prinze Jr. has done a brilliant job of imbuing The Iron Bull with charisma.

It really is spectacularly absurd though.

For my part I am playing as an excommunicated fantasy muslim Mage, romancing Cassandra. She's quite likeable a character- if functionally insane- and the fact it's an option is almost as funny as the Iron Bull romances.

Also she is apparently the only straight woman in the game so far as I can tell.

The game is a worthwhile addition to any library belonging to someone with sufficient time to expend on it.  Thank you to those who got it for me, it killed the time awaiting my sanity to return painlessly.

The ending battle of the game though is a bit of a disappointment. Almost as much of one as siding with the Mages in the storyline, whom are depicted as bitter idiots with the survival instincts of suicidal hamsters.

Ah, and Henchperson #62- you're going to love the replacement arm. By all accounts it is as compared to a conventional prosthetic what a swiss army knife is to a cheese cutter.