Important Update. More From the Inbox and Merry Christmas or whatever the hell you want to call it. 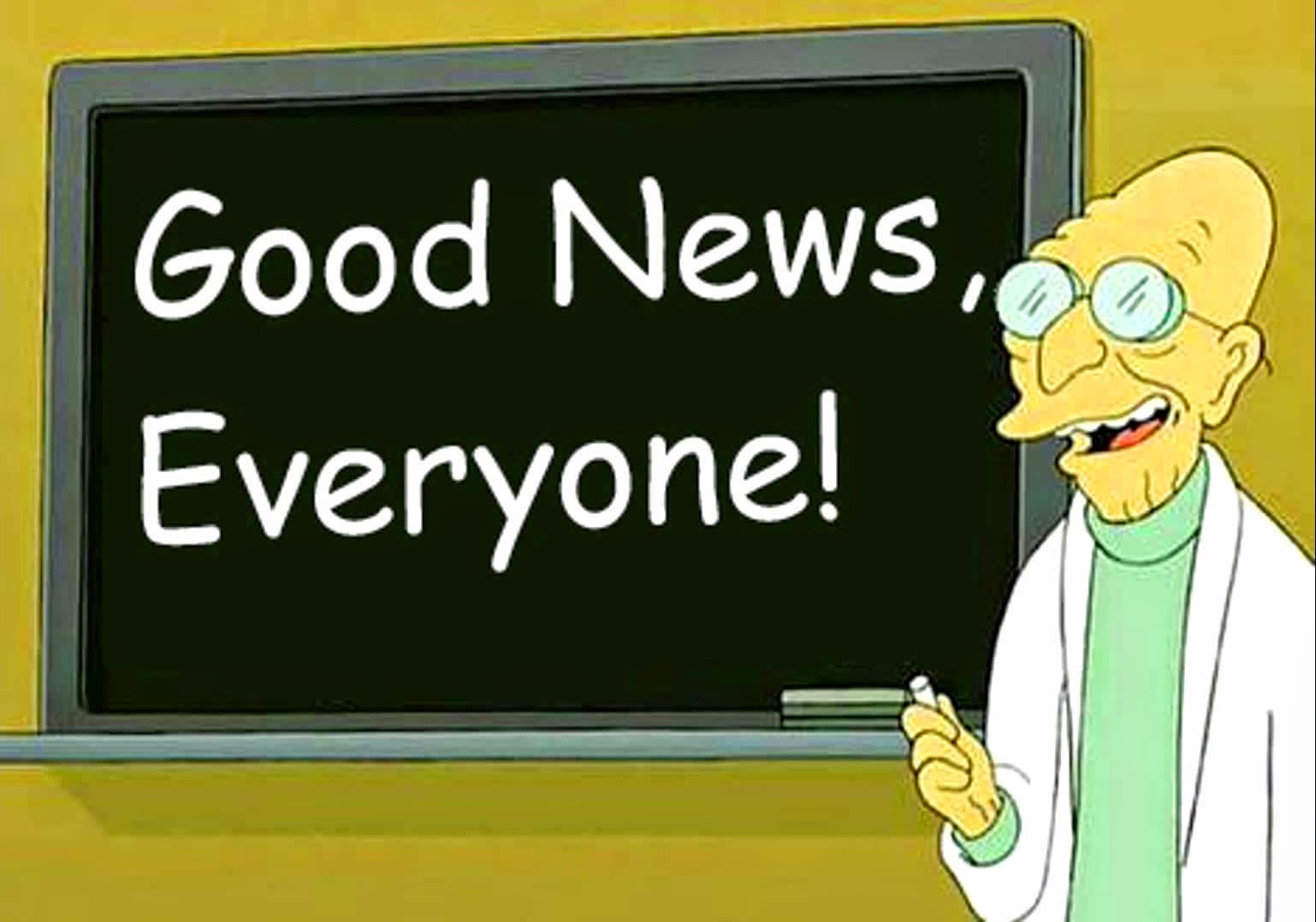 The Strawman Syndrome crisis is resolved! More or less.

After a great deal of hard, hurried work by our resident geniuses we have managed to devise a cure for the infection that results in Strawman Syndrome.

Again, for security reasons, I cannot go into detail into how it works. Suffice it to say it can be manufactured in sufficient quantity in a rapid period of time in order to cure all afflicted parties.

Naturally, there has not been time for the usual necessary safety protocols in testing so I, and certain Henchpeople, have volunteered to be infected and have the cure tested upon us. At least three other wretchedly insipid smarmy bastards have been 'cured', which is excellent as I was THAT CLOSE to trying to get my authority reinstated for the purpose of having them thrown bodily out of Sky Lab.

As mentioned before, I am temporarily without authority as a practical security precaution while I deal with the infection. I don't mind, I fully understand and have rather enjoyed the challenge of trying to circumvent the symptoms intellectually.

Not that I expect to succeed where so many other brilliant minds have failed.

Still, as an exercise I have decided to answer some messages from the inbox. First up, we have this tedious bastard.

Godspeed, Sir. Your efforts to deal with this attack rapidly and efficiently are not unappreciated. Has there been any new news regarding what party is responsible for this?

There really is no call for that. I've done my best, we all have. That there were subsequent outbreaks at additional locations was the result of attacks being perpetrated at those locations rather than any failure to respond to the first outbreak adequately, there was no cross-traffic between infection sites.

In fact, this revealed that our attackers didn't know the location of several other sites, which is rather good news. All simulations suggest they would have struck all simultaneously if they could have. It's very easy to be critical from the sidelines, but I do not sincerely believe we could have been any more efficient.

Also, how dare you mock our uncertainty over the perpetrators of this attack. If this is the work of the Order, as implied, that we aren't certain is perhaps the most damning piece of circumstantial evidence. If YOU'VE learned anything more, by all means forward the information to your site's Sub-director.

I'm starting to get rather cross. Perhaps it's time for a comedy inoculation.


I've seen this one before and I have to say, this time it seemed almost a mockery of the way I walk. That I can recognize the absurdity of this thought tells me it has had the desired effect though, as did re-reading the previous inbox letter. Henchperson, while I am still clearheaded, your support is appreciated. I may be a vain moderate megalomaniac, but the well-being of my employees is as important to me as my own. I believe I answered your question otherwise, however not in the most appropriate tone.

I have to say I am not pleased with your failure to keep to a schedule with your blog. I understand you were facing something of a crisis, but when one comes to expect an update at a regular time and then goes without the better part of a week without seeing one, it's frustrating and discourages further attention.

I suspect the comedy has worn off with alarming rapidity. I keep rereading this and every time it seems like you are sincerely bothered by an infrequency of blog updates while a potential catastrophic infection threatened to destroy Arketer Labs and kill untold employees. Oh ho, yes, I get it, you no doubt are referring as well to other missed deadlines during which there presumably were no such crisis. Well, you self-assumed omnipotent asshat, how about YOU launch a clandestine organization devoted to uniting some of the finest minds in the world towards the purpose of furthering Humanity itself, to turn Science Fiction into Science Fact, and THEN keep up a meticulous update schedule for something no one sees as anything other than something akin to some angsty Teenager's bad poetry blog! I am signing violently at #0 for you to be fired immediately but they're just shaking their head at me from the other side of the observation window.

I am properly irked now. Taking some deep breaths... Going to close my eyes for a bit and then partake of some proven mediating humor...

Much better. I find this funnier than most as I understand it. Not quite hilarious, hah hah, but it sticks with you nicely. Impossible to take it the wrong way... Probably because it seems impossible to take the right way. If there is a right way.

Ok. Well. Still a bit irked, but I will grudgingly, seethingly yield you have a point. I perhaps could have kept to schedule. Though in the present context it would hardly seem to be important to do so.

I am glad #0 isn't listening to me at the moment, or so help me I would probably have something done to you I would surely regret once the cure is applied.

This is my first year here and I am not sure I understand what the policy is so far as holidays are concerned. I know there is a party planned, but I have noticed that it hasn't been stated what we are celebrating. Is Christmas verboten?


Oh Wah Wah Wah. Why is it so damnably important the annual celebration be called what YOU call it. Do you have ANY idea how much hassle we've gotten over Christmas parties? Highly intelligent people, GENIUSES, who will wet their standard-issue underthings over the annual Christmas party being called the Christmas Party, because it's Christian and they're Athiest and it should be called the Solstice party. So FINE we call it a Solstice party, and next thing you know we've got a bunch of angry Christians asking why they can't call the Christmas Party the Christmas Party anymore. Strangely the Jewish employees are mostly tolerant either way though we have had the odd one demanding Hanukkah parties and one person demanded Kwanzaa parties and really that many parties was just so VERY excessive.

So yes, it's the Christmas Party, deal with it. It's also the Solstice Party, and the Kwanzaa Party and the Hanukkah party and the BLOODY PASTAFARIAN SAUCESTICE! Call it what you like, and everyone else will too. It just will NOT be written down and no matter what it is called NO ONE is allowed to 'correct' anyone else.

Just get over it and try not to trip over the various related religious icons and decorations. I admit it gets rather crowded with everyone trying to decorate even a rather large room with all of their respective holiday decorations. Kind of funny watching the Solstice advocates trying to come up with something to decorate with though. I don't think many people actually celebrate one of the coldest and darkest times of the year for it's sake alone.

I really don't want to keep at this, I don't like being angry. Being angry makes you objectively physically stupider, you know. Anger and fear, stupid. All these scum-sucking rage-a-holics out there would probably love this disease. Finally, they can make even LESS effort to learn ONLY AS MUCH as they have to to get REALLY ANGRY and then ignore any other details under the assumption they're filthy lies.

Just like that stupid stupid scandal over the Polish angsty video game on steam. "Hatred", I think it was called. Look it up, people all ranting that the game should be taken down because one of the developers hit 'like' on the wrong facebook page once and another one gave someone a tattoo of Mjolnir. What the hell is wrong with these people? Since when was that adequate evidence anyone was racist, much less a Neo-Nazi?!

You know what, I'm not doing any more reviewing. Have some Solstice Carols by the H.P. Lovecraft Historical Society.

The last one is particularly easy to sympathize with at present.

Merry Christmas and a Happy New Year to all of you. Wonder why the hell I bother. I CANNOT BE CURED FAST ENOUGH.

Progress continues, whinging jackasses.
Posted by Arketer at 11:11 AM