As the savvy viewer may note I have allowed this record to languish dramatically since... about 2016.

That said my big goal for this year is to reclaim domains I have foolishly yielded to my own weird insecurities and neurosis and the angry scolding of Zero. Such as writing this. So, here we are.

I suppose I shall start with a recounting of what I am at liberty to discuss- as a compromise for the peace of mind of my Security Chief and my patience in listening to their lectures I will henceforth try to avoid discussing any of the activities of Arketer Labs or myself in that context.

Since 2016 I began making several small videos on a then-new youtube channel that I should probably delete wholesale at this point, but will not because I am outside of professional contexts hideously lazy.

I met with some success, had some great growth for a bit, developed a neurotic block on scripting out videos and moved on to live streaming, creating a second channel for it- which has had almost no growth whatsoever.

I've taken up the creation of art, animation and other assets in VR expanding on my set designs, intros and outtros and have sculpted many novel individuals from the rogue Elder-spawn Omegon to this fellow below. 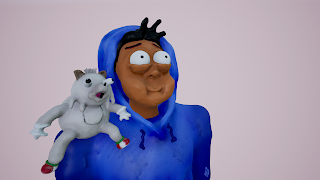 I've made quite a few friends and one or two enemies, a wide range of people I generally wish well and one distinct Frenemy .

Perhaps most notably is that I have effectively landed a comedy acting gig on much more successful Youtube Creator Magog of Morskar's show, SIDE QUEST wherein I play the rather wretched Arcturus the Black Compass.

I've launched a redbubble merch store with the aforementioned Frenemy by which I can and have sold some of my art- and will be offering increasingly more of my sculpted models here.

It's been an interesting, egads, five years since I started with this? Really?

I really need to get a bit more serious about this, particularly with the A.L.E. committee whittling away at my petty cash allowance and forever subjecting me to greater indignities at Steam's hands. I'm not at all sure they are taking the ethics charter seriously themselves.

I mean sure, hypothetically being obligated to sing karaoke, listen to their selections of music or forcing a live reaction to selections from the Catalina Collection do not technically count as abuse but they do seem to take a special glee in the indignity.

Which... I should be fairly numb to from my youtubery anyhow. We'll see how it pans out, but I REALLY should have drank a bit less New Year's Eve...

Meanwhile I perhaps shouldn't complain, what with countries lockdowning themselves into oblivion and/or catching fire.

I will strive to work updating this blog into my schedule in the future. In the meantime-

So long as progress continues, success is inevitable!