As you can see, I am back. I am not sure entirely many people quite noticed I was gone to start with, but that's just one of those things a mature person has to bear with good grace.jerks

That said this little period of silence has only lead to, hopefully, a renewal of personal purpose and refinement of priorities.

They had an untold number of hairs you presently lack, however replaced they may have been by new growth since.

They're sporting a layer of skin you've sloughed off, and lack the new layer you've got under the rest.

This isn't to say you're entirely different. Hardly enough time has passed for there to be significant turnover of body cells and that old whopper about every cell in your body being replaced in around seven years is patently false.

Indeed, you have a number of neurons in particular that have lived and will live precisely as long as you do- or a few seconds longer depending on how you end.

But that is entirely too morbid.

Rather than dwell on the fact that the persistence of being is quite possibly illusory, it's best instead to note that we as sentient beings are not only profoundly mutable- as time renders us all- but unlike all the other creatures of creation (in nature anyway) we are capable of conscious self-alteration. Which means we can at any given point in time start pursuing self-improvement to counteract the mindless destructive change that is entropy.

For a time anyway.

Alternatively at any given point we can choose a new direction for ourselves and set out on that path. Ten years to master almost anything. It's not too late to become an expert on anything you like, if you can find the focus.

So, let us all set out today to become a person whom our present and past selves would look upon enviously.

At least until that future person becomes toothless, wrinkled and/or senile. At which point looking back fondly is probably going to be inevitably preferable barring a solid faith in a pleasant afterlife. 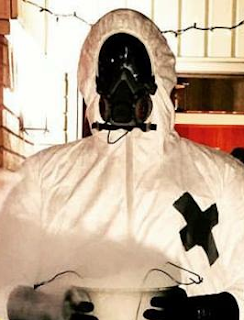 I am definitely no longer this reputable-looking gentleman sporting that vase of perfectly safe fog-concealed halloween candy.

Progress continues.
Posted by Arketer at 12:05 AM