Or resumes, rather. Faking my death on short notice meant I had to be less thorough than I would like, which posed some danger. What if, for example, they HAD somehow managed to retrieve the corpse? Even failing to do that had business for Arketer Labs simply continued as normal surely someone would have been suspicious. So it was very much necessary to have everyone go through the motions of a total closure.

Still, that necessity has passed. This has struck me as an apt moment to view as a renewal if not quite a rebirth. Much progress was lost on various studies, but I am confident any ground we retread will be mapped all the more thoroughly for it. Happily no real ground was lost on the Deep Seven project in this stage as, presently, all progress continues to be the autonomous work of the nanite cloud.

This is critical, as Deep Seven is the project that will make worlds of new projects possible.

In this moment of renewal, allow me to better describe what Deep Seven actually is.

Deep Seven will ultimately be a grand-scale research facility at the bottom of the sea, at a nigh unprecedented depth with access to geothermal energy. As far as location goes, this is as accurate as I dare to be for security reasons. However, once Deep Seven is complete I believe it can be rendered more or less immune to outside meddling. Housing the grand majority of Arketer Labs' work from the moment of activation, it will be equipped to pursue almost any project that can be conceived of within a framework that simultaneously protects the outside world from complications of said projects even as it protects said projects from the outside world.

In Deep Seven, I fully expect to launch new technologies where they can be studied, refined, and advanced without concern of co-option or theft by military, corporate or other clandestine interests until such time as they are ready to be released to the responsible parties of the world in a responsible fashion.

In the meantime we will be free to press firmly against the boundaries of known science almost recklessly in as much comfort as possible. Deep Seven will have parks, zoos (for multiple uses), multiple types of cafeteria, bowling alleys, movie theaters, even a few smoothie bars. I am particularly looking forward to those.

At present it would be inadvisable to put up some of the schematics, but one day I most certainly shall. In fact, one day I may be able to open Deep Seven up to the public even- not all of it of course, but partially.


Anyhow, now that I need not feign death any further I have returned to 'Role Playing' in Guild Wars 2 and on the matter of death- my Mentor is dead.

Yes, Seiran of the Durmand Priory, has passed away in my personal story.


Yes, after a period of tutelage about which I can remember very little, the carefree Sylvari Scholar gave her life for reasons she herself did not seem to particularly understand. With a final piteous whine of 'There was so much left to see and do!' she bravely closed a large door with herself on the wrong side of it.

I have learned from 82's notes that Sylvari cannot be 'Risen' undead so wherever the story goes next I can be sure I will not be seeing them again.

In the meantime since then I have achieved the vaunted Level 80. I have achieved this through consumables and taking advantage of aggressively playing within 'The Edge of the Mists', a metagame in itself that boils down to a rather violent Follow-The-Leader. A commander is designated by a special icon on the minimap, everyone follows them around and kills everything they come across- including the occasional group of players from an opposing 'team'. It's strangely relaxing.

In fact, even though I have achieved my goal I may return to it now and again- or perhaps consider other forms of Player-Versus-Player, though I anticipate I may not care for such.

In the meantime, people are now at liberty to behold Director Arketer of Tyria in his (rather ostentatious) work attire. 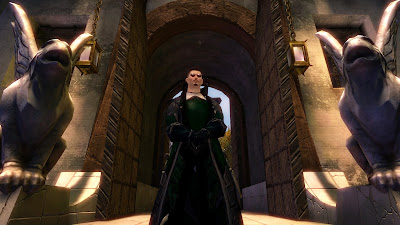