Unfortunately said progress is not, in itself, especially interesting. The autonomous squid fart continues it's peculiar wafting and basic foundations for Deep Seven keep manifesting as the necessary materials are consumed by the cloud.

Do not misunderstand me, this remains miraculous, but all things considered it rather feels like the nanites themselves are having all of the fun. There have been no noted irregularities in construction and the oversight crew reports that so far everything has been proceeding exactly along projected lines. It is good to know that the odds of us needing to fire off electromagnetic pulses in an emergency shutdown are ever-decreasing, but the waiting is no less tedious.

So, I have had plenty of time to continue Role Playing.

I have found it easier to imagine a version of myself within this imaginary world than anticipated as of late, which I believe I can thank the miserable state of humanity within the game for. I attempted to discuss it with a fellow human who simply took it as an insult. 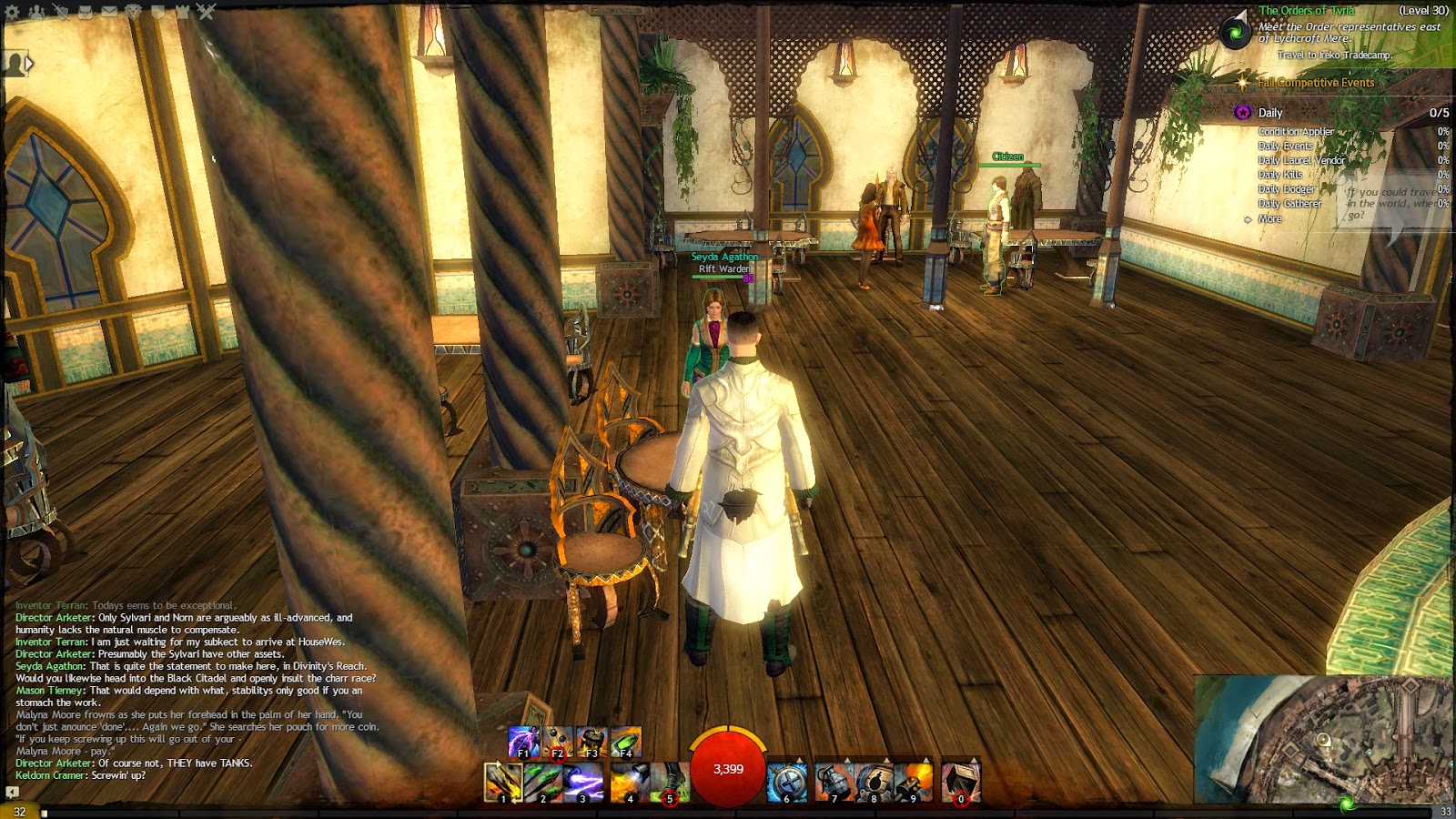 Absolutely absurd. The Norn are giants who turn into giant were-beasts. The Charr? Massive cat lion/bull people with a warlike disposition and a military fortified with steel structures, turret cannons, advanced rifles and- again- tanks. The Asura? They are apparently tiny, obnoxious gentrificated goblins and are at a technology level that only raises the question of why they haven't killed all the Dragons themselves. Robots, death rays, teleporters- they have it all. They effectively rule the world accordingly, or could do so in short order. About the only race on comparably dismal footing as humanity are the plant people or Sylvari. However humans can't naturally regrow lost limbs and aren't quite literally growing off of a massive tree in the hundreds with orders implanted in their heads already nor can they grow military hardware out of the ground.

Humanity has... what? A corrupt government and massive crime? The most popular brothel/tavern in in the game world? A magical monarch? Yes, that's something to be proud of, it clearly worked out so very well for Ascalon. (For those reasonably unaware, that was another human kingdom in the game whose magical monarch incinerated his entire kingdom and damned his people to ghostly undead slavery just to spite the Charr.)

Humanity needs help in this world.

Thus I have found Director Arketer's purpose within the game, the re-creation and improvement of a type of mechanical soldier called a Watch Knight. Apparently they were made by the Queen of Kryta, or if anyone else made them they don't seem to have received any credit. Unfortunately, whoever DID make them was apparently horribly incompetent. Shortly after their unveiling they were hijacked and used as, according to 82's notes, 'yet another stupid army for the horrible plant Mary Sue'. (Personally I think 82 was overly fixated on this 'Scarlet'.)

I stated my intention to said fellow human, who was no less offended and was- in fact- horrified. 'But they did so much damage!' she said. Apparently some humans in the game feel that because they botched handling technology once, they should stop pursuing it. That they should leave it to the other, smarter races.

There are real-world parallels I could draw, you can surely imagine the countless doomsday scenarios people can imagine for nanotechnology. Had I listened to such people Deep Seven would not only not be underway, it would be decades from commencement- if it was ever rendered practical at all!

Going back to 82 a moment, I used 15 gold from his account for Director Arketer to 'buy' the location of a place that contained wreckage of Watch Knights or Clockwork Horrors, to explain where Director Arketer would get a lead on making his own. Hopefully he won't be bothered.

Apparently the seller of this information heard Director Arketer's speech on the importance of struggling for technological equality and was moved. I assumed I, Director Arketer, would be suspicious given my goals would be human advancement rather than Sylvari but as the location was as legitimate as any entirely imaginary place in an imaginary world I think I would have seen the risk/reward ratio as being acceptable.

Perhaps I should try and make a Role Playing event of this... I know of at least one group of Mercenaries. I would be protective of my henchpeople, so hiring a more expendable unit of guards would probably be rational.

Again, in all other news there is nothing remarkable. This is pleasant, but probably will not last. No doubt eventually one of my rogue's gallery of rivals and antagonists will attempt to interfere for reasons either malicious, misguided or both.
Posted by Arketer at 1:07 PM